I know from running a business, the best compliment a customer can give is their referral and recommendation. So this is my best complement to Steve, Courtney, and the rest of the staff at Sonora Grill:

Sonora Grill is one of the best Mexican restaurants in Utah. Not only is it great food, it is very unique. The best way I explain to those who have never been is that it is “gourmet mexican food.” Most people I tell this to seem rather confused by this, and think it is some kind of oxymoron. When they think of Mexican restaurants, they think of those we have around here. 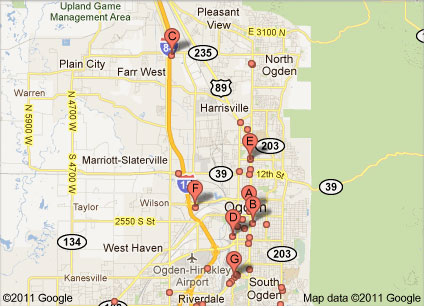 Most of these restaurants are what I would call Americanized Mexican food. It can be good, but it isn’t very authentic. I lived in Mexico for two years, eating with lots of different families and at many restaurants. So I know authentic mexican food when I have it. Also, there are several restaurants locally that cater to the Latino community. They are very authentic, typically in-expensive, and pretty tasty. But many times their menu is only in Spanish, and most of my friends don’t care for the really authentic food.

Then, there is the Sonora Grill. Their approach is to take the authentic ingredients, flavors, and dishes of Mexico and do amazing things with them. They have a professionally & classically trained chef who approaches mexican food like any other fine dining genre. They are serious about using the freshest ingredients and going above-and-beyond when it comes to preparing finely crafted dishes. They do all of this with a passion for the food, which really shows.

So when you go to the Sonora Grill, you get very flavorful food that each flavor is carefully balanced and blended in. It is like taking Mexican food to the next level. They will import a lot of their ingredients like spices, chiles, and cheese from Mexico so they can have the best flavors. They have some of the basics, like more generic Burritos & Quesadillas, but their best dishes are their house specialties. So while it might be tempting to go with the “safe burrito,” try one of their specialties. Here are my personal favorites:

Sweet Pork Tacos – Also know as Tacos al Pastor in Mexico, these tacos are made of pork that has been marinated for a very long time, traditionally a full day. These were my favorite tacos in Mexico. While Sonora Grill can’t cook them 100% authentic (I’ve written about Tacos al Pastor on exactly why), these tacos come as close as you can get here in the States.

Chile Rellenos – They have a few menu items with Chile Rellenos, and I will tell you these are the best I’ve ever found. A Chile Relleno is a poblano pepper that is stuffed with mexican cheeses and sometimes other things. They are then battered and fried for a nice crisp on the outside. I love them, and recommend everyone try them at least once.

Market Fresh Sea Food Special – I rarely get sea food unless I’m at a restaurant on the coast, but Sonora Grill does it right. It seems every week they have a new special with an in season fish that they can get and serve fresh. I’ve had some amazing dishes that were excellent that were specials. Also, they typically cost the same as a normal entre, instead of being twice as much like other restaurants. So for $15 – $18 it is a great deal.

Chicken Chalupas – Forget what you know at Taco Bell, this appetizer has three Chalupas which have a thick corn masa base and piled on top with shredded chicken, tomatillo salsa, onions, cilantro and sour cream. They are really yummy.

I haven’t tried all the dishes here yet, but some others I’ve heard good things about are the Alambres (aka Fajitas) and Ceviche (specially cooked sea food). I also saw they added Pozolé, which is a great mexican soup, so I need to try that as well.

Now, I think this is Ogden’s best kept secret: Sonora Grill’s Regional Dinners. Four to five times a year, Courtney, the chef, will select a region of Mexico and prepare a five course meal (which technically would be 7-8 courses since many times the plates will have multiple things on them). It is $32 per person, and afterwards you feel like you should have paid way more than that. This is where their passion for Mexican cuisine really shows.

The chef will plan the dishes weeks in advance, importing in special ingredients for just this dinner. Then, the day of the Dinner (and sometimes even days before that), the chef will spend hours and hours preparing the food. It is an opportunity for the staff to say “If the restrictions on serving a busy restaurant weren’t an issue, and we had all the time and ingredients we could ever dream of, these are the dishes we’ll make.” I’ve been to two of these dinners now, and it was the absolute best mexican food I’ve ever had.

Tonight’s dinner was for the region of Oaxaca, which is know for their Mole (pronounced “mo lay”), which is basically a sauce. It is labor intensive to make Mole, and they made not one, but five different types for tonight’s dishes. Chef Courtney spent about seven hours, since 5 AM in the morning, preparing all the different Moles. Each one was carefully and artfully prepared. I’ve never had such well-prepared Mole before, it was extremely impressive and down right yummy.

I took a few pictures from my iPhone during the dinner. I didn’t get all the plates, but here were some of them. Now, I really enjoy Mexican food, but I couldn’t remember all the details of each dish, so I can’t remember all the ingredients. But I do know they all tasted great.

The appetizers, including a very delicious mole tamale & salad

A Chile Relleno stuffed with beef, pork, and black beans on a yummy tomato sauce.

The other dinner we attended was the Mexico City region, which had amazing Beef Tongue Tacos that tasted like Barbacoa Tacos, and Duck in an Ash mole. Both dinners were really good (though if I had to pick a favorite, I’d say the Mexico City dinner).

They are done with the dinners for this year, but will start them back up in the spring of 2012. They post the details on their website and Facebook.

So thank you, Steve, Courtney, and the rest of the gang at Sonora Grill. You can really tell that you all strive to make some serious mexican food that is great. I look forward to the Regional Dinners next year!

This site uses Akismet to reduce spam. Learn how your comment data is processed.